Take a popular songbook series like The Singer’s Musical Anthology, for example.  These twenty-plus volumes are filled with great solo musical theatre repertoire, but many of these songs have become extremely overdone over the years because so many performers and teachers use the series exclusively.  I’m not saying we should throw out our SMTA volumes- they’re still solid resources.  However, it is never a bad idea to broaden our repertoire horizons.

There is one exception to my advice above: composer collection songbooks.  These type of books feature songs written by a single composer or songwriting team.  In my experience, these books are often treasure troves of popular standards and rare gems by specific musical theatre songwriters.  If you’re planning on investing in musical theatre songbooks this holiday season, these are your best bets.  Below are ten solid choices to consider. 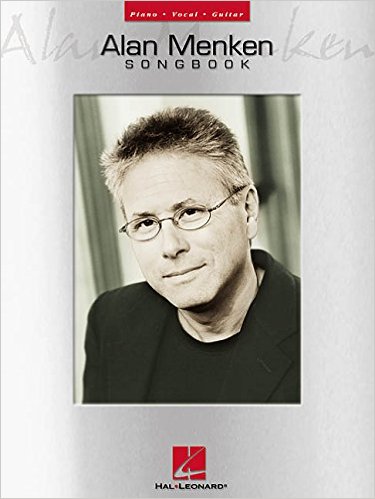 I’m a big fan of this book.  Alan Menken is a Tony, Grammy, and Oscar-winning composer who is best known for his work with Walt Disney.  However, Menken’s songwriting output extends far beyond Disney tunes.  He has scored Broadway and Off-Broadway musicals, Television Shows, non-Disney films, and much more.  Even though The Alan Menken Songbook is over a decade old, it contains some excellent lesser-known gems for musical theatre performers.  Some of my favorites include: “Cold Enough to Snow” (Life with Mikey), “I Wanna Be a Rockette” (Kicks: The Showgirl Musical), “Need to Know” (Weird Romance), “Never Again” (King David), and “Sailing On”. 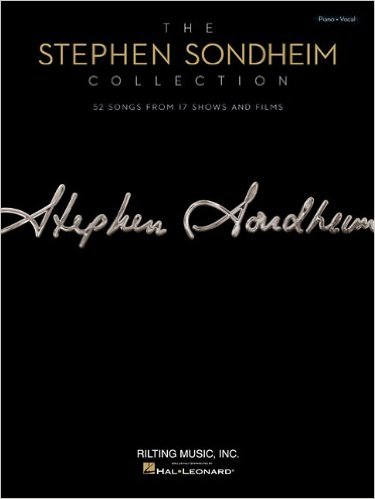 Stephen Sondheim has one of the largest musical outputs of any living musical theatre composer today, so any attempt to condense his monumental work into a single book was never going to please everyone.  Still, Hal Leonard has done a pretty good job selecting 52 songs from 17 shows and films that Sondheim has contributed to over the years.  Many of the Sondheim standards are here, including selections from Into the Woods, Sweeney Todd, Company, A Little Night Music, and Sunday in the Park with George.  You also get some lesser-known tunes like “Fear No More” (The Frogs), “I Remember” (Evening Primrose), “What Can You Lose?” (Dick Tracy), “Talent” (Roadshow), and two selections from Assassins.  Overall, I recommend picking up this book when you can even though it isn’t a 100% comprehensive Sondheim resource.  If you’re looking for something more wide-reaching, check out Hal Leonard’s new Sondheim for Singers series. 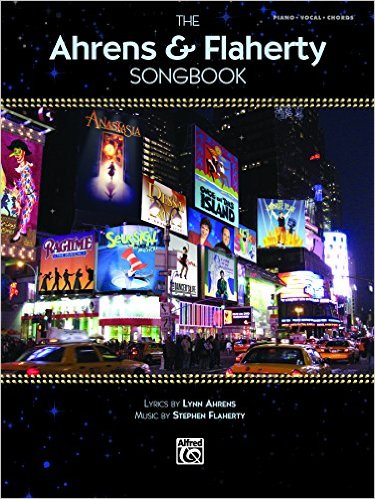 Here is another musical theatre songwriting team with a huge, diverse body of work.  Stephen Flaherty and Lynn Ahrens are two of my favorite ‘contemporary musical theatre’ writers out there today.  Yes, they’ve been in the business for decades, but they continue to regularly produce shows (some of which have been more commercially successful than others).  Overall, this book contains many great songs from the team’s various collaborations over the years.  Plus, all the selections were handpicked by the songwriters themselves.  Some great solo standards here include “Back to Before” and “Make Them Hear You” (Ragtime), “Journey to the Past” (Anastasia), “It’s Possible” (Seussical), and “Larger than Life” (My Favorite Year).  Lesser-done gems include “Come Down from the Tree” (cut from Once On This Island), “I Was Here” (The Glorious Ones), “Times Like This” (Lucky Stiff), and “Streets of Dublin” (A Man of No Importance). 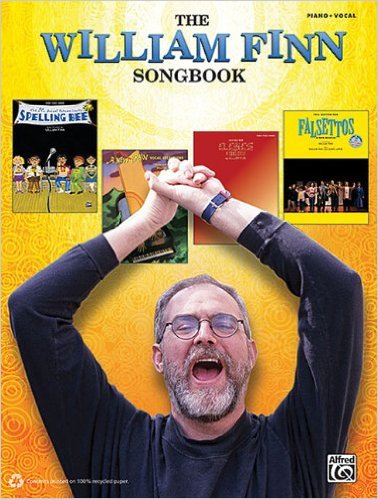 I was delighted to discover that William Finn has a composer collection songbook.  Here is a musical theatre composer/lyricist who doesn’t receive nearly enough praise.  Some of Finn’s most daring, cult shows include Falsettos, A New Brain, and Elegies: A Song Cycle.  His most recent ‘mainstream’ success was the Broadway musical, The 25th Annual Putnam County Spelling Bee.  This book contains many great selections handpicked by Finn himself (some of which I don’t know- yet).  A few of my favorite songs in this book are “I’d Rather Be Sailing” (A New Brain), “What More Can I Say?” (Falsettos), “Infinite Joy” (Elegies), and “I Speak Six Languages” (Spelling Bee). 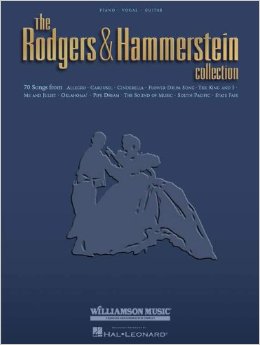 Overall, this book features a solid collection of hits from one of the most successful songwriting teams in musical theatre history (and probably the most famous).  You really can’t go wrong with Rodgers & Hammerstein, but many of their songs are very overdone in auditions today.  All the standard R&H shows are represented pretty well in this book: Oklahoma, South Pacific, The Sound of Music, The King and I, Flower Drum Song, etc.  As far as lesser-done selections go, five songs from Allegro are included along with two from Pipe Dream (“All At Once You Love Her” and “All Kings of People”).  Three selections from State Fair and two from Me and Juliet also made the cut (“No Other Love” and “That’s the Way It Happens” from the latter show).  Advice: avoid the overdone shows/selections and spend some time researching the others. 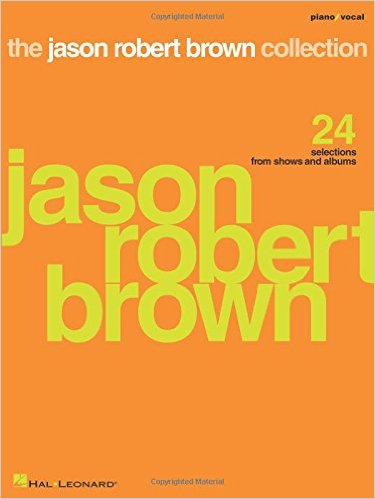 This is a nice little collection of JRB show tunes and stand-alone songs.  However, it could use an update.  Because this book was released in 2006, you aren’t going to find selections from his more recent shows like 13, The Bridges of Madison County, and Honeymoon in Vegas.  That said, the book does contain several memorable songs from Songs for a New World, Parade, The Last Five Years, and the lesser-known Urban Cowboy.  The other stand-alone selections included are from JRB’s albums, Songs of Jason Robert Brown and Wearing Someone Else’s Clothes.  There are enough song choices in this book to keep JRB enthusiasts happy.  My picks: “It’s Hard to Speak My Heart” (Parade), “Someone to Fall Back On”, “Stars and the Moon” (Songs for a New World), and “Moving Too Fast” (The Last Five Years).  Ask your JRB-obsessed musical theatre friend for more song recommendations (don’t we all have one of those friends?). 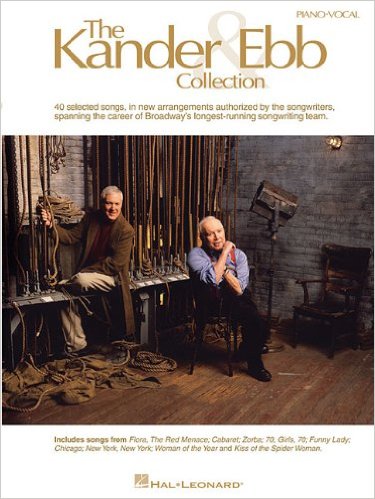 Overall, there are many excellent selections in this book.  Just about all the standard solo numbers from Chicago and Cabaret are included, but that was pretty much a given.  The real surprise here is the pleasantly large number of songs from lesser-known Kander & Ebb shows like The Act, Woman of the Year, The Visit, Steel Pier, Flora, The Red Menace, Skin of the Teeth, Curtains, The Rink, Kiss of the Spider Woman, and more.  As a team, Kander & Ebb had a pretty mixed record in terms of producing commercially successful shows, but we shouldn’t blame their music for that in most cases.  In fact, there are so many great songs in this book that I can’t even list them, so I suggest buying it ASAP and finding audio recordings on Spotify and YouTube to familiarize yourself with the songs you don’t already know. 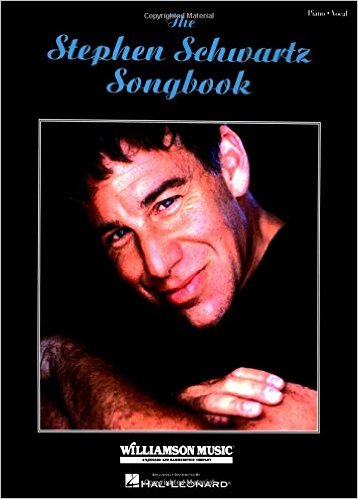 A good selection of songs from Stephen Schwartz’s pre-Wicked days.  The book includes pieces he wrote himself along with numbers he co-wrote with others.  Many of Schwartz’s standards from Godspell, Pippin, Children of Eden, and The Baker’s Wife are here- along with selections from films he contributed lyrics to like Pocahontas and  The Hunchback of Notre Dame.  Some lesser-known gems included in this book: “Cold Enough to Snow” (co-written with Alan Menken), “Blame It On the Summer Night” (Rags), “It’s an Art” (Working), “Since I Gave My Heart Away” (Geppetto), and two selections from The Magic Show.  I wouldn’t completely avoid his standards either.  “When You Believe” (The Prince of Egypt) is a good pop-driven tune that isn’t as overdone as it once was, and a song like “Lost in the Wilderness” (Children of Eden) is always a crowd-pleaser.  Schwartz knows how to write a memorable tune. 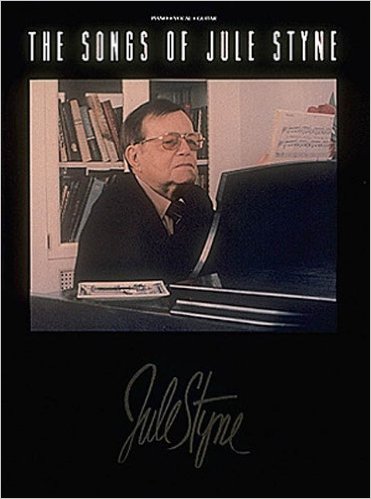 Let me start by saying that Jule Styne published over 1,500 songs in his career.  You read that correctly- ONE THOUSAND AND FIVE HUNDRED.  This book includes only 62 of those.  Now, I’m not a Jule Styne fanatic, so I couldn’t tell you much about the 1,400+ omitted songs.  Still, this seems like a decent selection of his works.  There are many standards included here like “All I Need is a Girl”, “Everything’s Coming Up Roses” and “Some People” (all from Gypsy), “Diamonds Are a Girl’s Best Friend” (Gentlemen Prefer Blondes), “Don’t Rain on My Parade” (Funny Girl), “Let it snow! Let it snow! Let it snow!”, “Never Never Land” (Peter Pan), and many more.  The book is probably worth the money for the sheer number of great standard showtunes alone.  If you’re looking for something more representative of Styne’s huge body of work, you may want to look elsewhere though. 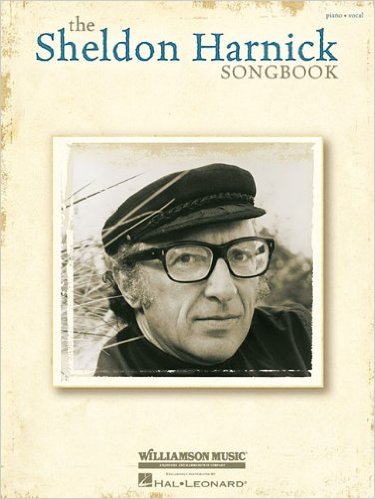 Sheldon Harnick is one of the most prolific musical theatre lyricists of all time.  He is best known for his frequent collaborations with Jerry Bock.  This book contains 33 songs from throughout Harnick’s career, and I’d say it’s pretty much a must-have songbook. The highlights here: all three selections from She Loves Me, “Artificial Flowers” and “The Picture of Happiness” from Tenderloin (a musical that is not about steak), “Oh, To Be a Movie Star” from The Apple Tree, and three songs from Fiorello!.  Personally, I suggest cutting back on the Rodgers and Hammerstein songs a bit and looking to the works of Bock and Harnick for inspiration from time to time.